Who Are The Rainbow Warriors? 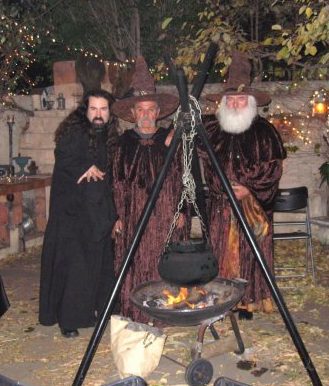 We are the first coven of the Rainbow Warrior Tradition. We got our start in 1997 when two of our High Priests, Pan and Druimaelduin, began holding “open by invitation” Sabbats after Pan decided to leave the group with whom he had been studying. Though they didn’t realize it at the time, they were laying the foundation for what would later become the Rainbow Warrior Tradition. In 1999, Nathair and Pan did some healing work for another individual; seeing how well the two worked together, Pan and Druimaelduin began incorporating Nathair into their rituals. Shortly after this, the group expanded to include another fledgling witch who chose the magickal name Aengus. The foursome continued working together presenting Sabbats and Esbats to the local community. Based on the fruitfulness of their combined efforts, the group decided that it was finally time to formally recognize themselves as a coven. They slowly began using the name Rainbow Warriors and on June 21, 2001 performed a birthing ritual for the coven and set the intention that one day the ways of the Rainbow Warriors would be followed as a Tradition.

Later that year, Aengus decided to leave the group; needing to do some solitary spiritual soul-searching. With his departure, the group welcomed the arrival of Amber. The addition of her energy and input helped to shape the direction the group went from there. The group took on a couple of students new to the Craft and began developing its training program. One of these first students decided that the Craft was not for him and ended his studies prematurely. As nature abhors a vacuum, his departure made way for the return of Aengus who adopted the new name of Griffin to signify the changes and growth that he had done on his own. The last student successfully completed her year and a day and ended her studies with the group, leaving the five core members who founded the coven.

Griffin eventually decided to walk his own path and again left the group; though as before, his departure heralded a new arrival in the form of Hotep; an eager young student. Hotep began his studies as a Dedicant (after a year of study as Pan’s student) in 2006 and provided wonderful opportunities for the group to fine tune its training program. With the support and guidance of his fellow Rainbow Warriors, he was elevated to 1st Degree in January of 2008 and received his 2nd Degree elevation in November of 2009. In August 2009, Sadhaka became the newest student of the coven and proving to be a tremendous addition.

In August of 2010, after successfully completing her time as a Student, Sadhaka became the newest Dedicant in the Rainbow Warrior Tradition. To mark the transition, she adopted the new magickal name of Durga. Shortly after her elevation, we received a request from a longtime friend of the coven to begin studying with us. And so that brings us current with Mariner being our newest Student. We are all very excited to have him on board and look forward to growing with him.