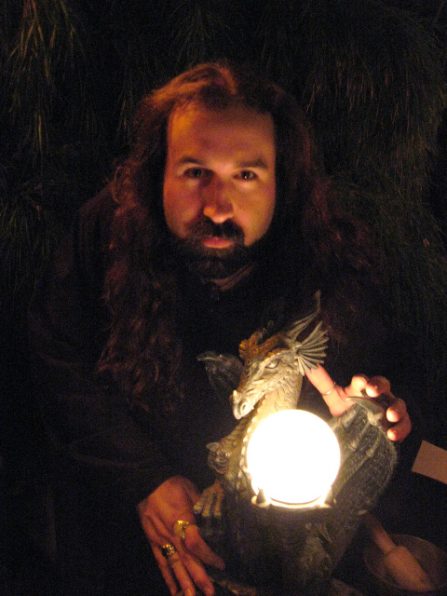 I’ve actively been a witch since around the age of 10, although I was 14 before I actually used that word to describe the collection of my practices and beliefs. A Leo born in 1975, my father was in the military, which meant that we moved every three years or so. My parents were raised Catholic but were no longer practicing, having become disenchanted with the church business. They raised my brother and I without a specific religion, choosing to give us the freedom to make our own choices in life in the pursuit of happiness, while still teaching us to be good moral people.

So then, you might be asking how a 10 year old becomes a witch in the absence of hereditary training? Quite simply, from the time I was very little, I (like many of the people I surround myself with) knew that I was different than most others. I was very open to the worlds around me. From as early as I can remember, I Saw things that I knew others did not. Energy was just as much a visual reality as the walls of my house. As far back as I allow myself to remember, I had visions. Visions of things not directly connected to the present time or physical location. I would often see a stranger and get a vision of how this person was going to die. Whether or not these visions were the product of an overly active morbid imagination, or they were true glimpses of a possible future, they frightened me. And so, it was around the age of 10 that I begged the Universe to make them stop. And they did.

That was when I met my first Teachers. I use the word ‘met’ very loosely because I don’t ever recall being introduced. I do recall laying in bed (my brother and I shared a room) and seeing the energy which had been pooling by the door begin to form two human-like shapes. I tried to call out but found that my voice had escaped me. I remember the beings approaching and then I remember waking in the morning. These nighttime visitations continued for some time. I found that I had a growing understanding of the way that the world around me worked. When I would learn something ‘new’ in school, often it would be more like putting words to concepts that I had already worked out.

I moved to a new home in 1988, where for the first time I met someone else who saw things similar to the way I did. I had met my first witch. He was my age and we worked out the magick thing together. We never actually Cast Circle, but still we learned. After moving again in 1991, I met another witch; this time more quickly. She would have an effect on me like no one else. In 1993, I moved out to Los Angeles to attend college, which is where I started making my connections in the pagan community. I began studying with a priestess, into whose tradition I was initiated. After taking my first degree, I declined my second and left the trad.

Over the past ten years, I have come to study with a group which has evolved into a new tradition; the Rainbow Warriors Tradition. I met and began practicing with Druimaelduin and Pan. It wasn’t until Aengus was brought to us that seed of the Rainbow Warriors was planted. I am thankful for that gift, for while he is no longer practicing with us, the seed is growing into a wonderful expression of spirit. Amber now joins us in caring for this new tradition and with time and love, it will continue to grow and flourish. A second degree witch and Reiki Master Teacher (in both Usui and Karuna Reiki), I look forward to my own spiritual growth as it continues to grow alongside my trad brothers and sister.

In my time with The Rainbow Warriors, we have performed many rituals (open by invite sabbats & moons, house blessings, handpartings, gender unity, etc.); but perhaps the ritual closest to my heart was the handfasting to my loving husband Tim on August 27, 2005 (our two year anniversary).